Have you seen Reddit's /r/colorization sub? People use photoshop to add color to old black and white photos. This is a good problem to automate because perfect training data is easy to get: any color image can be desaturated and used as an example.

This project is an attempt to use modern deep learning techniques to automatically colorize black and white photos.

In the past few years Convolutional Neural Networks (CNNs) have revolutionized the field of computer vision. Each year the ImageNet Challenge (ILSVRC) has seen plummeting error rates due to the ubiquitous adoption of CNN models amongst the contestants.
As of this year classification error in the ILSVRC is thought to be better than humans. Amazing visualizations have shown that pre-trained classification models can be retooled for other purposes.

Here are some of my best colorizations after about three days of training. The input to the model is the left-side grayscale image. The output is the middle image. The right image is the true color—which the model never gets to see. (These are images are from the validation set.)

There are bad cases too, which mostly look black and white or sepia toned.

Here are a bunch of random validation images if you're interested in getting a better idea of its competence. The image files are named after the training iteration that they're from. So higher numbered will have better color.

From here on I'm going to assume you have some familiarity with how CNNs work. For a great introduction check out Karpathy's CS231n.

First order of business was picking a pre-trained model to use.

So I wanted to use a pretrained image classification model (from the Caffe model zoo) to extract features for colorization. I chose the VGG-16 model because it has a simple architecure yet still competitive (second place in 2014 ILSVRC). This paper introduces the idea of "hypercolumns" in a CNN. A hypercolumn for a pixel in the input image is a vector of all the activations above that pixel. The way I implemented this was by forwarding an image thru the VGG network and then extracting a few layers (specifically the tensors before each of the first 4 max-pooling operations), upscaling them to the original image size, and concatinating them all together. The resulting hypercolumn tensor has tons of information about what's in that image. Using this information I should be able to color the image.

Rather than reconstructing the entire color RGB image, I trained models to produce two color channels which I concatenate with the grayscale input channel to produce a YUV image. The Y channel is intensity. This ensures that the intensity of the output will always be the same as the input. (This extra complexity isn't necessary, a model could learn to reconstruct the image entirely, but learning only two channels helps debugging.)

Originally I used Hue-Saturation-Value (HSV) color space. (As it was the only color space with a grayscale channel that I knew about.) The problem with HSV is that the hue channel wraps around. (0, x, y) maps to the same RGB pixel as (1, x, y). This makes the loss function more complex than a Euclidean distance. I'm also not sure if this circular property of hue would screw up the gradient decent—I decided to avoid it. Also YUV's conversion formula to and from RGB is just a matrix multiplication, HSV is more complex. What to use for the question mark operation? The simplest thing to do would use a 1x1 convolution from 963 channels to 2 channels. That is, multiply each hypercolumn by a (963, 2) matrix and add a 2D bias vetor, and pass thru a sigmoid. Unfortuantely that model is not complex enough to represent the colors in ImageNet. It will converge to desaturated images.

I tried various hidden layers and larger convolutions, but before I get into that, I want to talk about the loss and some other choices.

The most obvious loss function is a Euclidean distance function between the network RGB output image and the true color RGB image. This works to some extent but I found models converged faster when I used a more complex loss function.

Blurring the network output and the true color image and doing Euclidean distance seems to give the gradient decent help. (I ended up averaging the normal rgb distance and two blur distances with 3 and 5 pixel gaussian kernels.

Also I only calculuate the distance in UV space. Here's the exact code.

I use ReLUs as activation functions throughout except at the last output to UV channels—there I use a sigmoid to squash values between 0 and 1. I use batch norm (BN) instead of bias terms behind every convolution. I experiemented with using ELUs instead of and in addition to BN, but with limited success. I did not experience great gains with leaky ReLUs. I experiemented using dropout in various places, but it didn't seem to help much. A learning rate of 0.1 was used with standard SGD. No weight decay.

Models were trained on the ILSVRC 2012 classification training dataset. The same training set used for the pretrained VGG16. It's 147GB and over 1.2 million images!

I experiemented with many different architectures for transforming the hypercolumns into UV channels. The one I will compare here is two hidden layers with depth at 128 and 64, 3x3 stride 1 convolutions between them.

This model might have enough complexity to learn the colors in ImageNet. But I never spent enough time to train it fully because I found a better setup. I guess the problem with this model will be immediately obvious to anyone who has worked with CNNs before. It was not to me.

Unlike in classification models there is no max pooling. I need the output to be at full 224 x 224 resolution. The hypercolumns and the susequent 128 depth layer take up a lot of memory! I was only able to run a model like this 1 image per batch on my 2 gig NVIDIA GTX 750ti.

I came up with a new model that I'm calling a "residual encoder" - because it's almost an autoencoder but from black and white to color, with residual connections. The model forwards a grayscale image thru VGG16 and then using the highest layer infers some color information. Then it upscales the color guess and adds in information from the next highest layer, and so on working down to the bottom of the VGG16 until there is 224 x 224 x 3 tensor. I was inspired by Microsoft Research's winning classificaiton entry for ILSVRC 2015 in which they add residual connections skipping over every two layers. I used residual connections to add in information as it works its way down the VGG16. 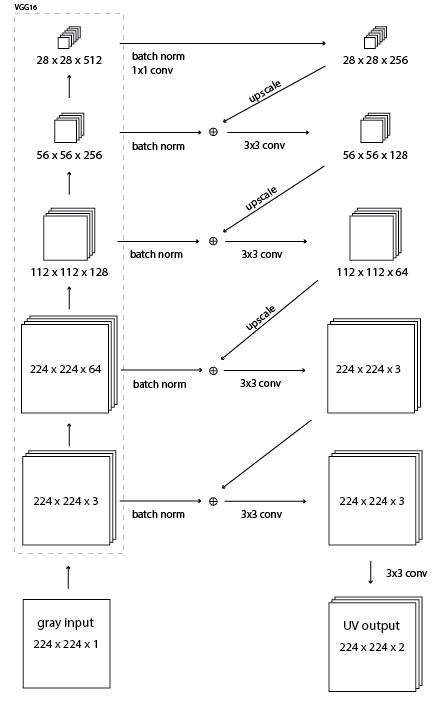 This model uses much less memory. I was able to run it at 6 images per batch. Here is a comparison of training this new residual encoder model and the original hypercolumn model. 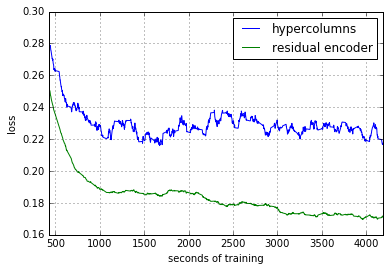 The model did poorly here. There are slight tints of blue in the sky—but other than that we get only a sepia tone. More training will probably color the rest of the sky, but it probably won't ever give the building or train car much hue. (reddit post)

Decent colorization! It got the skin tone correct, didn't color his white clothes, and added some green to the background. It didn't add the correct tone to his hands and is missing the rich saturation that makes the manually colorized version pop. (reddit post)

The sky is only slightly blue and it missed coloring his chest. Also colored his shirt green, perhaps because the wool has a plant like texture and is towards the bottom of the picture. Otherwise quite good. (reddit post)

This is Anne Frank in 1939. The model is unable to color cushions because cushions could be any color. Even if the training set is full of cushions (which I don't think it is), they will all be different colors and the model will probably end up averaging them to a sepia tone. A human can choose a random color and even if they're wrong, it will look better than no color. (reddit post)

Another bad colorization. The color of the car is lost information. The person who colored this photo just guessed it was red, but it might as well have been green or blue. The model seems to average the color of the cars it's seen, and the result is this. (reddit post)

It likes to color grass green.

Here is a trained TensorFlow model to play around with:

This model containes the VGG16 model from Karen Simonyan and Andrew Zisserman (that I converted to TensorFlow). It is available for non-commercial use only.

It kind of works but there's a lot to improve on still:

Samim used the model to color this Charlie Chaplin movie.